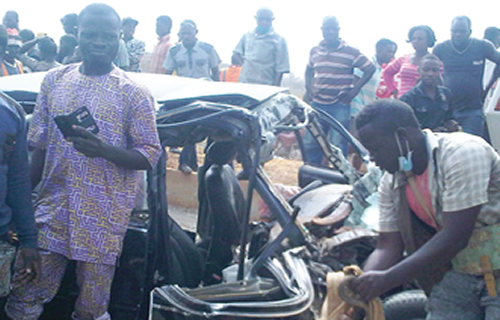 At least 3 died yesterday when a car got involved in an head-on collision with a truck on the untarred Mowe Ofada Road in Obafemi Owode LGA of Ogun State.

For over 30 minutes, residents and passers-by were desperately trying to rescue the victims of the auto crash.

Owode residents blamed the accident on dust generated by the ongoing construction work on the road. It was learnt that the incident occurred when the driver of the car attempted to overtake a vehicle while on speed. They said the driver did not see the front before overtaking the vehicle in his front and rammed into an oncoming sand truck.