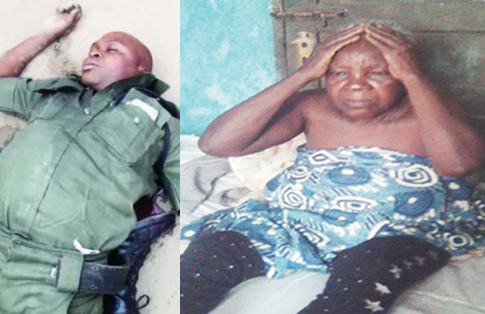 The 75-year-old mother of the twins killed by a drunken mobile policeman at Ketu area of Lagos State, on Saturday, said the incident signalled the end of her ‘world’. The woman, Beatrice Oyesolu, said she was in the church on the fateful day, praying God should guide and protect her children, unaware that they had already been murdered in cold-blood by Steven James.

The 32-year-old twins, Taiwo and Kehinde, were the only children of Oyesolu. Her husband died last year. The children were killed along with their friend, Jejelola, at Plaulson Plaza, Ketu. The trigger-happy sergeant, after killing the three men, turned the gun on himself. Taiwo was a naval officer, while Kehinde worked with Conoil.

The old woman, who had been crying since Saturday when she heard the news of her sons’ death, said: “I was praying fervently in the church when my phone rang. The call was from my boys. I did not pick it until after the church service. The missed calls were from Kehinde. After the church service, I called Kehinde, but somebody else, a stranger, picked the call.

The person told me that my sons had been killed. I immediately fainted. I was rushed to a nearby hospital where I was revived.” The grieving woman mumbled: “How do I start my life? My children had been catering for me. I am 75 years old; I can no longer do anything.

They brought chicken, clothes and other Christmas gifts for me on Friday. “They promised to celebrate the New Year with me in an elaborate way. I did not know that Friday would be the last time I would see them.” Oyesolu urged the Lagos State government and other well-meaning Nigerians to come to her aid, “because I can’t do anything anymore. My kids were my helpers”.

The twins and their friend, Jejelola, were said to have gone to the hotel to book room for one of their friends, Shola, whose girlfriend was returning from United Kingdom when the mobile policeman opened fire on them because they refused to buy beer for him and equally cautioned him to be a responsible policeman.

A witness said: “The mobile policeman took some bottles of beer and Alomo Bitter. He started threatening the hotel guests. He said he was going to shoot and kill them. He said he would kill 30 people, unfortunately, he shot the twins and their friend before killing himself.” Recalling the last moment of the twins, another witness said that Taiwo, who was serving in Abuja, attempted to hide at the back of a container after James shot Kehinde.

He said: “Taiwo tried to hide, but the policeman chased him. He found and dragged him out of his hideout. He shot him point blank in the chest. There was no way he could have survived.” Another regular guest at the hotel, Supo, said that sometimes in August 2015, he was almost shot and killed by James.

According to him, he escaped death by a whisker through divine intervention. He said: “The mobile policeman had been misbehaving for long. But the management of the hotel never cautioned him. He once threatened to kill me and then killed himself for reason I still could not fathom. A few days ago, I went to him and asked what my offence was; he said I was a proud person.

He asked how a young man like me could be lodging in a hotel.” Supo said that the killing of the three men pained him. He added: “When he threatened to shoot and kill me and kill himself, I immediately reported to the manager of the hotel. He promised the hotel management would do something about it.

But they apparently did not do anything. He had now killed three promising young men. “Whenever I was going to the hotel after my first encountered with the policeman, I always go with N500 to pacify him. I don’t want to die. Four days ago when I visited the hotel, I gave him money again.” When our correspondent visited the area, the hotel has been vandalised by some of angry youths in the community. Some youths were sighted washing blood stains of the deceased.

The remains of the deceased were said to have been deposited at the Ikorodu General Hospital mortuary. The Lagos State Commissioner of Police, Mr. Fatai Owoseni, who visited the area, described the incident as very “pathetic and unfortunate.” He said: “I came to see the affected family members and also sympathised with them.

I bring the massage of the Inspector General of Police (IG) to the bereaved family members. What happened today is against the doctrine of the IG. The IG said we should respect the rights of every citizen. “Policemen should not be posted to unauthorised place. Even if they do, they should conduct themselves in a civil manner and also respect the rights of every people.” The commissioner also said that James would be dismissed posthumously.