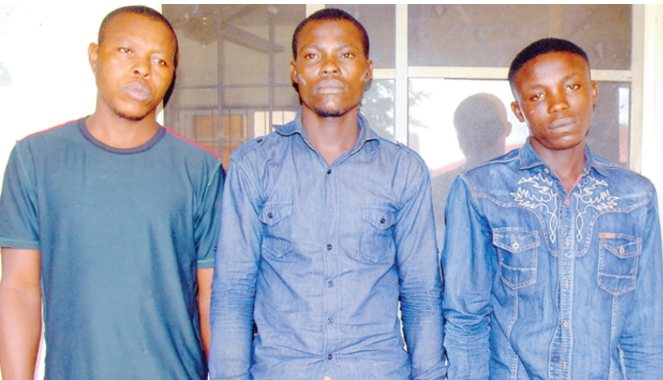 The suspects have been identified as Sylvester Bibra 34, aka Gardafi, Daren 27 aka Shokey and Michael Ojintan 20. According to them, “we’re cultists.

We belonged to Aiye confraternity. Yes, we have ‘fall’ (killed) some people.” The suspects were alleged to be part of a group of cult members that had been maiming and killing at Ikotan Community, Lekki/Ajah, Lagos State. The suspects were further alleged, to be part of those that used to be hired by land grabbers, to kill or deal with people struggling over possession of land with them.

The gang used to work and walk in group and residents live in perpetual fear of them. The suspects said they have three guns. Police said it recovered machetes, UTC knives and several black caps from them. They confessed to have killed three people. But police think they are being economical with the truth. According to them, they were behind the murder of an Igbo trader, called DJ White. The late White sold electronics.

Another of their victim, Yusuf Elegushi, was killed over money sharing formula. Detectives from Area J Police Command were said to have started hunting members of Aiye confraternity, after receiving several petitions about their activities.

Pregnant Woman Forced To Sell Her Unborn Baby Narrates How An Evangelist Drags Her To The Shrine
Aiye, Black Axe Cult Members Arrested In Ajah Say Initiation Are Done During Birthday Parties