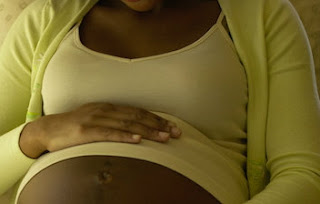 August 5, 2016 – Pregnant Woman Forced To Sells Her Unborn Baby Narrates How An Evangelist Drags Her To The Shrine For Blood Covenant

29-year-old Chidinma Okorie and 2 medical doctors have been paraded for child trafficking.

The doctors, who were said to be Okorie’s accomplices, were identified as Emmanuel Tobechukwu and Cosmos Ugorji.

Okorie said she had sold two children since she was introduced into the illegal trade by a woman whom she claimed was an evangelist.

“I have five children; but I’m not married. I have not sold any of my children; but I have sold two children, starting with the child of a pastor that I first stole. I’m pregnant and I have agreed to sell my baby to the evangelist for N100,000 when I give birth.”

She said the medical doctors were helping her in the trafficking because they had a ready market through a nurse that was still at large.

She said “Madam brought three of us (girls) from Ebonyi to Anambra State and took us to a shrine in Asaba where she collected our blood for voodoo so that we will not reveal to anybody the type of business we do.”