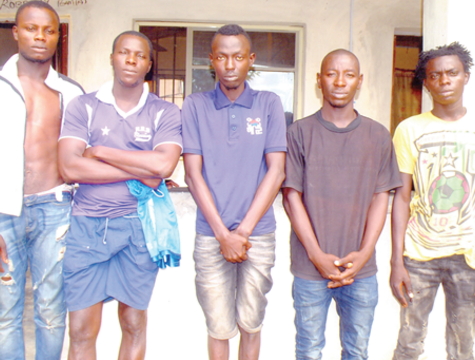 August 5, 2016 – Shock As Aiye Confraternity Members Arrested By Lagos Police Identify Each Other At Police Station

They explained that when they discovered they had been tricked and initiated against their will, they thought of running away, but realised it was like running away from ones shadow. They urged young Nigerians, to be wary of friends and avoid accepting birthday parties’ invitations.

One of them said: “If you don’t go for operation or cooperate with them after initiation, they would kill you. I can tell you that every one of us here, were tricked into becoming a cult member. It was never our wish.” The suspects were arrested after they allegedly started shooting sporadically on July 16, 2016, at Ilaje, Ajah, around 7pm.

A police source said: “They went about on two motorbikes, snatching money from people and shooting sporadically.” Six of them were arrested, Ayobami Ahmed 20, Balogun Ahmed 22, Olayinka Agbeto 35, Kunle Odeyemi 29 and Lekan Adekoya 26.

When they were taken to police station, police discovered they and four other suspected cult members, Sylvester Bibra 34, aka Gardafi, Dare 27, aka Shokey and Michael Ojintan 20, earlier arrested, knew one another. They all belonged to the same Aiye confraternity.