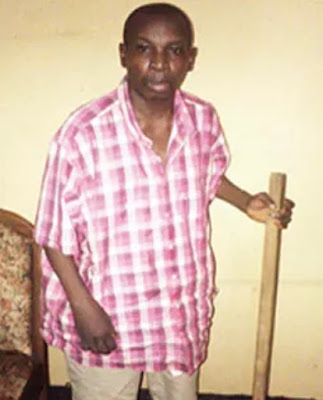 Mr. Rotimi Pedro, a 60-year-old chieftain of the All Progressives Party (APC) in Lagos State is down with stroke and needs financial assistance from well-meaning Nigerians.

Until he became paralysed last year, Pedro was APC ward chairman at Okerube Ward in Abaranje, Ikotun, Alimosho Local Government Area. Pedro, who has been bed-ridden for over 10 months, has been abandoned by family, friends and associates.

The party chieftain said he was struck by stroke three days after the announcement of President Muhammadu Buhari as the winner of the March 28, 2015 presidential election.

This, according to him, was after he had delivered his ward to APC at the presidential and National Assembly’s elections. He said: “In the midst of the celebration, three days after the election of President Muhammadu Buhari, I fell down and had my right arm and left limb paralyzed.

I was carried home from the scene. When my condition continued to deteriorate, my wife ran away with my two children, Yusuf (12) and Mutaqeemat (6). I don’t know their whereabouts till now.” Pedro said he was rescued by a relative and veteran journalist, Mr. Segun Adenuga, who accommodated him in his house at Agodo-Egbe, Ikotun area of Lagos State. Since then, he has been left to his fate, except occasional assistance from a few people. He added:

“I want to use this medium to appeal to APC party leaders, Asiwaju Bola Tinubu, Lagos State Governor, Akinwunmi Ambode, Senator Solomon Adeola representing Lagos-West Senatorial District and other well-meaning Nigerians to come and help me.”