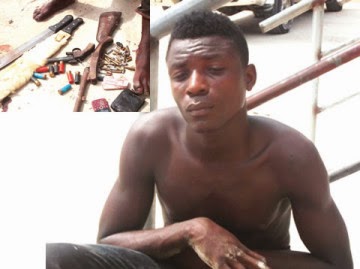 The undergraduate pictured above was one of the suspects arrested during a robbery operation at a popular supermarket in Ikot Effa area of Calabar yesterday.

According to police report, the robbery started about 8:30am.

Akpan Ekerette, the owner of the robbed store told police this is the 2nd time the robbers will pay him a visit this month. He said he initially thought they were customers until 2 of them walked up to the counter to demand money in his possession.

“At first I didn’t know they were armed robbers because they were about five that came into the store, while others stood outside. Some were also in a red Audi saloon car. One of the suspects, who was eventually killed, hit me on the head with his gun and ordered me to bring money.

“I directed him to my drawer where I had close to N500, 000, including cash from the day’s sales. That was when I started screaming and my neighbours alerted the police who came in less than five minutes and the armed robbers started shooting, during the exchange of fire they apprehended two of them while others escaped.”

“This is the second time they are attacking me this year. If not that the police responded on time I wonder what would have happened to me because apart from the money they took, they were also packing items from my shop including beverages and drinks,” Ekerette said.

Two other robbery suspects were arrested by the police but one died of his injury around 12 noon yesterday.