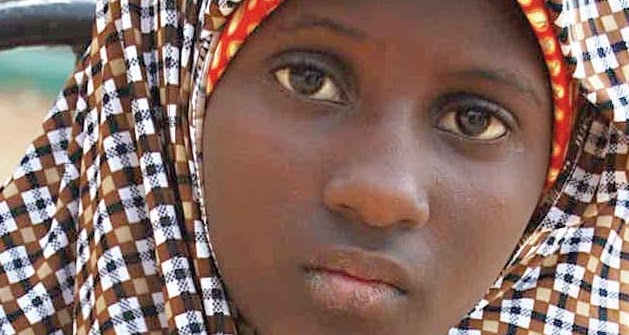 It was a bad day for suicide bombers yesterday as they were arrested in Kano and Gombe states. In Kano, a 13-year-old female suicide bomber, Zarahau Babangida, revealed how her par­ents initiated her into terrorism.

The female bomber in Kano, who was paraded by security operatives at the Bompai Police headquarters, gave an account of how insurgents executed the December 10, 2014, twin bomb explo­sions at Kanti Kwari Market. The blasts killed at least six persons and injured several others.

The suspect revealed that she was taken to the bush by her parents, where she met terrorists that recruited her, adding that it was from there that she, alongside the rest of the female bombers, were taken to Kano State on December 10 for the terror attack.

Frail-looking Zarahau recalled that she was delivered to the insurgents in the bush by her parents, but could not exactly say the location of the meeting point.

“They took us to the bush, near a thatched house. They called the three of us and some other women. Each of us was called out separately and asked if we would sacrifice our lives (Istishadiya). But I asked them this: ‘What is Istishadiya?’ They responded that it was suicide bomb­ing. I said ‘no’ to their request. They promised me that if I commit suicide, I will enter paradise.”

She said: “When I refused, they threat­ened to kill me and thrown me into a ditch where they keep sinners. They have already surrounded the bush to prevent the women from escaping. “Because they said that they would kill me, I granted their request.”

Zaharau revealed that she accepted to commit suicide so as to be allowed out of the bush alive, noting that following her acceptance, she and the other two suicide bombers were conveyed to Kano and on a tricycle, for the suicide mission in the market.

“When we dropped at the market, one of the girls announced that we would enter the place, settling in different loca­tions, urging the rest of us to detonate our bombs once the first one had gone off. Then the first girl entered with her own bomb into the market and as we went, the second girl asked me to detonate mine, but I refused. After that, she detonated her own bomb and the explosion hit me and injured me on the leg,” she said.

Zaharau noted that she slipped out of the market in the confusion and went to the main road from where she boarded a tricycle and headed to Dawanau, on the outskirts of Kano, where she had lived.

“At Dawanau, some of our neighbours came and I sought help. I asked to be taken to the hospital, but the women there said that their husbands were not at home. It was one of the elders in the area that finally took me to the hospital.

“At the hospital, the medical personnel started dressing my wounds. They had sewn the injury. Then later the driver of the tricycle who took me to Dawanau sur­faced and reported that he saw something inside his tricycle that I had forgotten. Al­though I tried to deny initially, they later called the soldiers on phone, who came and took me away,” Zaharau said.

Also, speaking at a joint press confer­ence organised by the police and the Di­rectorate of State Security (DSS), the state Police Commissioner, Alhaji Aderenle Shinaba, said the suspect was conveyed to perpetrate the act in the state from a hideout in Bauchi State.

He noted that the suspect claimed to be an indigene of Bauchi State, even as he added that one of the accomplices to the crime had been arrested and detained.

He said: “This girl was arrested in one of the hospitals she ran to in her quest to obtain medical attention,, because as a result of the blast in the market place, she was injured in one of her legs, which made her to run to the hospital, where we were able to apprehend her.”

Aderenle said Zaharau’s fate would be decided by the court.