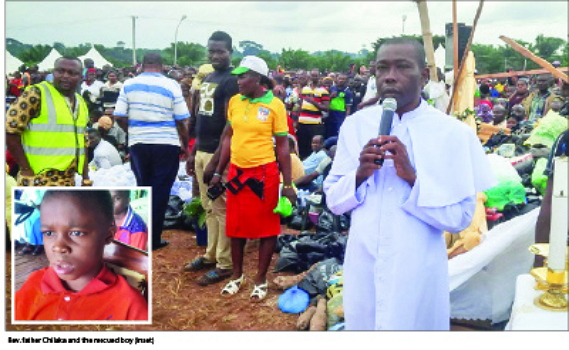 An innocent boy was buried alive in Ngwo area of Enugu over the weekend by some occultic men.

The 10-year-old boy was kidnapped along Independence Layout Axis of Enugu while hawking plantain before being taken to Ngwo to be used as sacrifice by some suspected secret society members.

The shocking discovery was made during a 3-day fasting and prayer crusade organized to clean Ngwo community of evil men.

One of the men who saw the boy as he was being buried informed a Catholic priest from Abia State, Rev. Father Modestus Chilaka who promises to rescue the innocent boy.

Three days after the ritual, Rev Chilaka took some men there to rescue the boy who was buried to his neck.

The ritualists plan to allow the boy to die slowly so they didn’t cover his head with sand.

“I was here and I saw a small boy who was buried alive as a sacrifice.”

The marvelous hand of God who rescued the boy from the ritualists forced Igwe Jerome Okolo to dedicate his life to Christ.