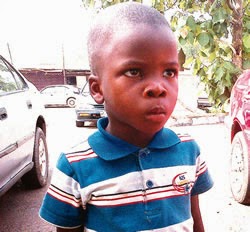 Meet little Abraham Adeyemi, a very brilliant 5-year-old boy abducted from an unknown location in Lagos by some kidnappers who promised to take him to Mr Biggs.

He was found wandering around Foursquare Gospel church in Mowe on Sunday and upon interrogation, he said some kidnappers took him from his place in ‘the Canal’ and promised to take him to Mr Biggs.

Police believed he was taken from Lagos as Canal is a popular words used by kids to describe Lagos. His parents are yet to come forward.

Continue Reading
You may also like...
Related Topics:boy, kidnapped, lagos