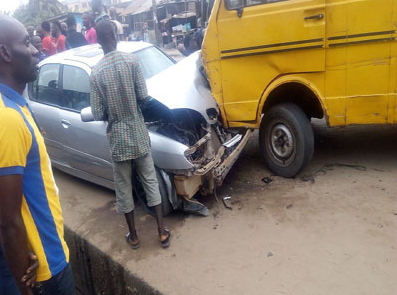 A bus driver on Monday collided with a parked Nissan car along Shibiri road in Ojo LGA of Lagos State.

The accident which happened around 9:45am was caused by the unruly behaviour of the driver simply identified as Friday and his conductor.

A passenger, Edet Umoh, said the conductor pleaded with the driver to pay him for job done, but the driver allegedly refused.

“The conductor held the driver from behind to disrupt him. The driver, who was angered by his actions, punched the conductor which resulted into an accident. I am so happy none of us was injured. Passengers warned them but they didn’t listen. It was after the accident that they kept quiet,” Edet Umoh said.