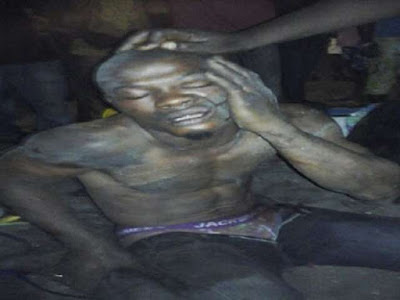 A popular thief has been caught by vigilant residents of Ikota in Eti Osa East LCDA of Lagos.

The suspect identified as Stephen Effiong was beaten to a coma last Wednesday after a resident who identified himself as Uche caught him removing food items like noodles and small bags of rice from stores and homes in the area.

He was dragged to the street by angry residents who knew him. They stripped him naked and beat him into a coma.

While they were about to stone him to death, a police patrol team stopped them and rescued him.

Stephen Effiong is currently cooling off in Kirikiri.