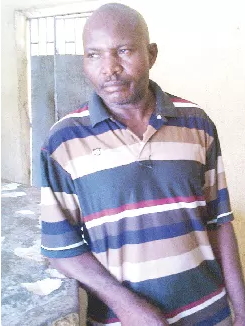 Obinna Anike, 44-year-old church usher has reportedly defiled a 7-year-old girl kept in his custody. Anike said that it was the devil who made him to defile the girl.

However, the technician begged police and journalists not to let members of the church he attends to know that he committed such crime. According to him, whenever the girl’s parents were leaving for work, they would bring the girl to his shop.

The idea is for the girl to walk to school with Anike’s children. The girl’s parent got to know about the incident after she started complaining of pains inside her private part.

Anike said: “The parents of the children used to bring them to my house since they used to leave home for work very early in the morning. I’m a radio technician and live near their house.

The children attend the same school with my children. One day, I asked the girl to come close to me. When she came to me, I shifted her pants and put me manhood, but it didn’t penetrate.

I poured the sperm I already released outside. “I have already condemned myself. I’m a Christian. I wouldn’t wait till I’m condemned by law enforcement officers. I beg everyone who is aware of this case to forgive me. I don’t know the forces that pushed me into this devilish act. I don’t want my church to know about this please.

I cannot question God. I don’t know why this is happening to me. I did not take alcohol or any drugs before I engaged in the act.” Anike, however, said his action was not for ritual purpose.

But the girl contradicted the suspect’s story. She said:

“Uncle Obinna lied. He is fond of calling me a ‘fine girl’. He did it many times. Last year before Christmas, Uncle Obinna called me into his room and warned me not to tell my parents whatever he was doing with me. He said he would kill me and my parents if I ever told anybody.

The suspect case will come up for trial next week.