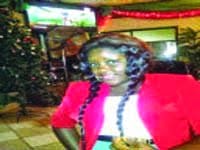 Pictured above is a 300 level English student at Nnamdi Azikiwe University who was declared missing back in September after she went clubbing with a wealthy man.

The lady identified as Annabel Nzubechukwu Edeh reportedly went home with a man she met at a club in Awka before she was declared missing on the 17th of September 2014.

As we speak, her colleagues said her remains has been found with her breasts and vital organs missing.

Her course mates said her decomposing body was found yesterday in Awka.