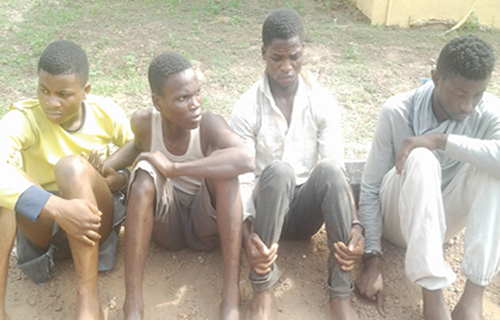 Tunde Labinjo, a suspected Eiye cult member is now in police net after he allegedly invaded a secondary school in Ogun State with a gun to unleash mayhem on unsuspecting students.

The 17-year-old suspect who finished from Overcomers Senior School, Ijebu-Ode in 2015, was said to have stormed the inter-house sports event of Muslim Cooperative School in Ijebu-Ode with the weapon concealed inside a polythene bag.

The suspect, a self-confessed member of Eiye Confraternity, went to the school with a friend who was apparently unaware of his fiendish intent. But luck ran out on Labinjo when policemen deployed to ensure security at the school’s sporting competition sighted him and suspected his bag.

He was promptly arrested after the shocking discovery of a locally-made pistol in his possession.

The teenager, who is the third of his parents’ four children, however, said the gun did not belong to him. He claimed that one Bolaji, now at large, was the real owner. Labinjo said: “On Tuesday (March 22), there was a brother who gave me a gun. He gave me at night. I did not want to take the gun home, so I kept it behind a school.