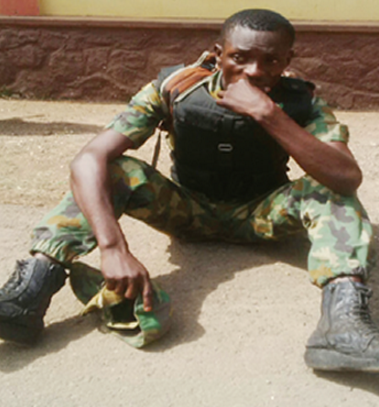 NIS impounded a truck-load of Indian hemp on Ajuwon- Akute Road in Ifo Local Government Area of Ogun State. The Commissioner of Police, Abdulmajid Ali, yesterday paraded the fake soldier, identified as Emmanuel Abiodun, at the state command headquarters, Eleweran, Abeokuta. Ali, who also paraded 34 suspected criminals arrested in connection with armed robbery, cultism and kidnapping, expressed the readiness of the command to provide security for residents during and beyond the Yuletide.

He disclosed that the 29-year-old fake soldier, who dressed in Army camouflage uniform and armed with two toy guns, was nabbed at the Redemption Camp, on the Lagos-Ibadan Expressway. The commissioner said men of the Special Anti- Robbery Squad (SARS), who acted on a tip-off, impounded the truck-load of Indian hemp on Friday.

He added that as the security agents closed in on the truck on Ajuwon-Akute Road, the driver and others in the vehicle jumped out and fled. Ali said when the truck was eventually searched, 297 bags of weeds suspected to be Indian hemp were recovered. Speaking with journalists, the fake soldier confessed to the crime.

The suspect said he bought the Army uniform in Aba, Abia State for N3,500. Abiodun claimed that he had acting as security escort to pastors in Port Harcourt, Rivers State and had escorted a pastor to the Redemption Camp before he was arrested last Thursday. He said:

“I had come out to receive a call outside the Redemption Camp when a retired general saw me and accosted me and challenged me. Later I was arrested and handed over to the police.” Abiodun, who claimed to be a merchant Navy, however, said he did not regret his action because “I had always wanted to be a soldier”.

Giving a breakdown of the command’s achievements in the last six months, Ali said no fewer than 116 armed robbers were arrested while seven were killed within the same period. The police chief added that among the suspected robbers were eight who had confessed to snatching 38 different cars in Lagos and Ogun states. He disclosed that 205 cult members and seven kidnappers were also arrested during the period while 69 vehicles and 125 ammunition were recovered.

Meanwhile, Ali warned against the use of explosives such as bangers, knockout and fireworks during the Yuletide. The police boss said anyone caught in possession of any of the aforementioned either for use or sale would be arrested and prosecuted. He said: “No dealer was given licence to bring in any of these fireworks.

That is why the Inspector- General of Police, Solomon Arase, has stressed that no explosives and fireworks would be allowed. “We will not allow blockage of streets. Any person or group of persons who block the road or make a road inaccessible to its users, and demand for money or any item, forcibly, from members of the public or road users will be treated like an armed robber for such act is tantamount to armed robbery and nothing less.”