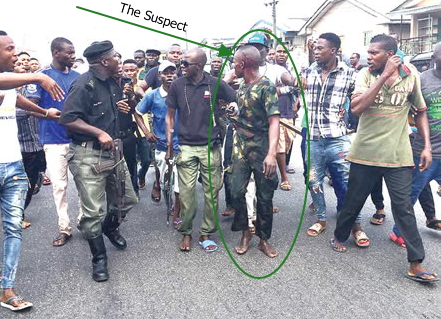 Pictured above is a man who impersonated an army officer in Delta State.

The 21-year-old army impersonator was nabbed in Warri yesterday for allegedly robbing a woman of her expensive iPhone 7 Plus on Sunday.

Luck ran out of the suspect who identified himself as Usman Jafar from Adamawa when the woman he robbed recognised him the day after the robbery when he brought the iPhone to Robinson Plaza, a mobile phones market in Warri to wipe off the information on it.

When the woman raised an alarm, an angry mob attacked Jafar around 9:20am and beat the living daylight out of him.

The suspect was given a hot chase by the mob who descended on him again near Major General David Ejoor home.

While they were about to setting him on fire, a military patrol vehicle passed by.

He was rescued from the grip of death by the military men who came to rescue him.

He was later taken into the barracks of 3 Battalion of the Nigerian Army in Effurun, Uvwie LGA of Delta where he reportedly confessed to the crime.