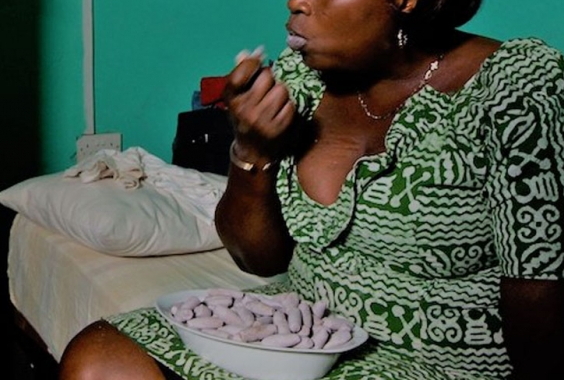 July 23, 2017 – Shocking Confession Of Ghanaian Prostitute Who Killed Over 100 Men With Spiritual Snake During Sex

36-year-old Katrine Obenewaa, a sex worker who resides in Accra Ghana has revealed that she has killed over hundred men with her spiritual snake and rendered over seventy of them impotent with this same serpent.

She made this during an encounter with Brytfmonline reporter, Samuel Mprah in an interview.

According to Miss Katrine, she started the business as a sex worker at the age of sixteen when she left home as a result of broken home.

“I was initially working as a local sex worker but later expanded my terrain of operations upon coming into contact with Miss Elizabeth Opeyemi, an international sex worker from Nigeria”. She said.

Miss Katrine divulged that, her encounter with Miss Opeyemi opened her up to things that she was naïve about when it comes to matters of sex business. She was the one who took me to places like Nigeria, Benin, Togo, and Burkina Faso among others for business purposes.

My eight years of friendship with Miss Opeyemi was a great moment that saw me with billions of cedis. I was able to buy two separates six bed room apartments from the monies I have made through my sex business and now owes a lot of other properties from this same sex business.

Miss Katrine disclosed that, the waddle nature of their business some years back prompted them to seek for spiritual backup with the aim of boasting their trade. Though I have acquired a lot of wealth from this business without any spiritual backup, the need for that inventiveness later trooped in.

She further unveiled that, their encounter with Alhaji Abugri, a spiritualist at Benin who has pledge to help them landed her into killing of hundred men with her serpent and landed over seventy of them into the state of impotency.

When quizzed about how she does this killing, she emphatically narrated that at the house of Alhaji Abugri, she has been given a cowrie and some substance that she normally inserts into her private part any moment she is about to embarked on her usual business.

To her these directives has reinstated her business to an extend that she began making monies as usual but something nasty has be occurring without her notice. “Those I have been having affairs with usually lost their life without my knowledge”. She cued.

She added that the realization of this occurrences pushed her to seek for explanations from Alhaji Abugri who later explained to her that the substance she has been inserting into her private part is a spiritual serpent that has been enticing men to seek for her service.

Miss Katrine also revealed that, she has pleaded with Alhaji Abugri to do something with this situation of hers but none of her effort yielded her any positive outcome. All he kept on telling me is that I can only alleviate myself from this situation on the day of my death.

Though I have acquired the needed wealth one could desire for in life, am still not a happy person because of this predicament in my life.

She indicated that she wishes she has never met Miss Opeyemi in her life. I have curse the day I met this Nigerian friend of mine. She said this in a state of remorse.