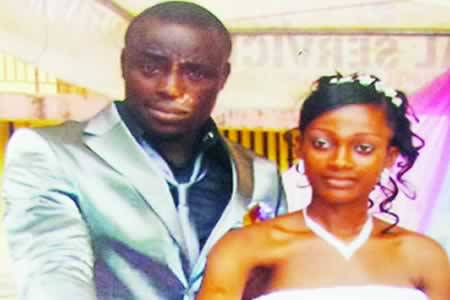 Officials of SCID in Panti Yaba are currently investigating a man who allegedly killed his wife in Festac area of Lagos.

The suspect identified as 29-year-old Oluchi Ajimowu reportedly poisoned his wife, Priscilla Ajimowu in her room on the 29th of November 2015, seized her phone and locked her up in the room.

He later left Priscilla for the dead and went out with their 2 children.

It was gathered that Oluchi on arrival met his wife foaming in the mouth.

The deceased demanded to the be taken to the hospital but he declined instead he gave her palm oil.

He reportedly videoed her for about 40 minutes after which she gave up the ghost.

It was gathered that prior to the incident, Oluchi had subjected the deceased to inhuman treatment for the four years they spent in South Africa. Oluchi came back to Nigeria four months ago while the wife arrived on November 27, two days before her death.

The couple’s 1st child, 7-year-old Ella Ajimowu said her father was not  nice to their mother while they were in South Africa.

“Dad used to shout at mummy and beat her and she would be crying. That day (November 29), we left her alone in the house. Daddy took the keys and mummy’s phone and locked mummy inside.

“When we came back home, daddy packed outside, locked us inside the car and went inside. After that, he called us to ‘come, come and see your mummy on the floor’. Mummy was saying, ‘Take me to hospital, I’m tired’. He started videoing her. He gave her red oil, but she spat it out. Her body was cold.”