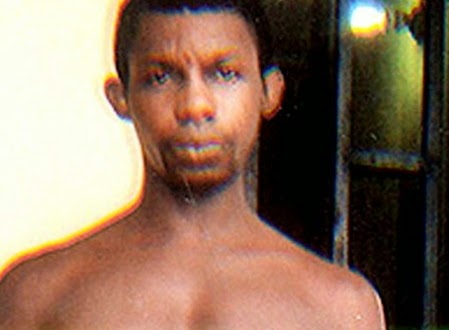 Feb 28, 2015 – Picture: Son Murdered Igbo Dad In Anambra For Not Allowing Him To Return To Pregnant Hausa Wife In Yobe Because Of Boko Haram

A 32-year-old man, Chinedu Em­manuel Nnalue is now cooling his heels behind bars follow­ing his arrest by detectives of the criminal investigation department in the Anambra State police command for allegedly macheting his 59-year-old father, Nwafor Nnalue to death.

The state Commissioner of Police, Mr. Hosea Karma, who confirmed the develop­ment, disclosed that the suspect equally cut the deceased’s hands and legs while muti­lating the body, told Saturday Sun gathered that the late Nwafor Nnalue was living in Damaturu, Yobe State with his family until they were forced to relocate to Anambra State as a result of the Boko Haram insur­gency. It was also learnt that the suspect, Chinedu was brought up in Yobe State before he travelled to South Africa and re­turned to join his family in the state where he eventually married an indigene.

Trouble, however, started after the en­tire family fled Yobe State and Chinelu’s wife refused to move with her two children along with the Nnalues to Anambra.

Soon after settling down in Anambra State, it was further gathered that Chinedu began to pester his father to allow him re­turn to Yobe to join his wife and two kids.

The conflict got to a head on January 23, 2015, when the suspect allegedly wait­ed for his mother, Mary and sister to go to the farm and thereafter went to his father where he was sleeping and butchered him.

Giving an insight into the incident, Mrs. Mary Nnalue said: “My late husband and my children were all living in Yobe State and it was because of the Boko Haram in­surgency that we relocated back to Anam­bra State in 2006. My son, Chinedu Nnal­ue went to South Africa and later returned and joined us in Yobe State after which we all returned to Anambra State.

“Chinedu married a Hausa lady who has two children for him and she was carrying another pregnancy. She didn’t return with us to Anambra State because her parents refused to release her. This has led to a frequent conflict between my son and my husband but my husband refused him be­cause of fear of Boko Haram. On the day of the incident, I saw my son, Chinedu sitting in his room and I asked him why he didn’t go for the morning mass and he didn’t give any reason.

“I went to the farm with my daughter and we got to know that Chinedu picked the cutlass which has been in his room for a long time and went upstairs to kill his fa­ther. It was the shout of my late husband that made us to rush back from the farm and when we got upstairs, Chinedu wanted to matchet his sister but she escaped.”

Sounding unrepentant, the suspect told Saturday Sun: “I had to kill my father be­cause he refused to give me permission to go back to Yobe to see my wife and two children who are still living in Damaturu. My wife is also heavy with pregnancy and I felt there is need for me to go and see her, but he refused, saying he didn’t want to lose me to Boko Haram.”

He said he was a Muslim when he was in Yobe State but returned to his original religion, Christianity when he relocated with his parents to Anambra.

CP Karma disclosed that the police had recovered the cutlass used by Chinedu to kill his father and that he would soon be charged to court for murder.