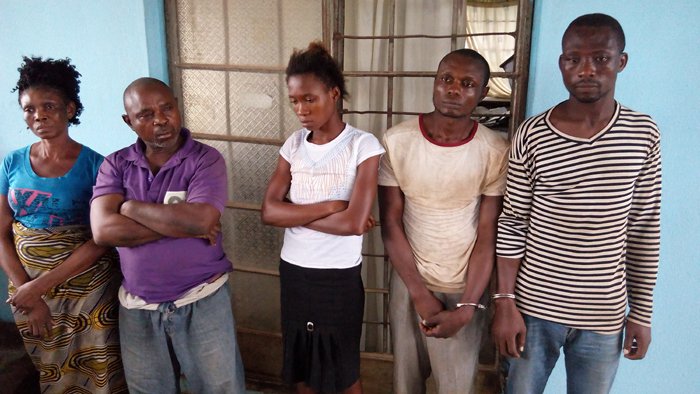 The abductors were allegedly on their way to sell the baby to Nma Charity/Maternity and Rehabilitation Center at Umunkpeyi in Isiala Ngwa South when they were apprehended.

Baby Chimnwemeri was said to have been abducted from their 13, MCC road, Abayi Aba residence on July 22 by Chinedu Ukachukwu a.k.a Obataosu (a troublesome person) from Ebiri Omuma in Rivers State and his accomplice, Kingsley Mbodo, an indigene of Umuowa, Orlu in Imo State.

It was gathered that Ukachukwu, a former neighbor of the Uche’s asked Chiamaka, Chimnwemeri’s sister to buy him bread before they disappeared with the baby.

The hoodlums were however arrested by the members of the Umunkpeyi vigilante group having failed to convince them of the rightful ownership of the baby. They were handed over to the police.

Other members of the gang – Gold, Mr. and Mrs. Frederick Ohadiwe were detained at the Abayi police station.

The Ohadiwe’s admitted to giving the suspects shelter but denied having knowledge of the crime they committed.

Ukachukwu said their plan was to sell baby Chimnwemeri to the proprietress of Nma maternity home, who he said had been buying babies from him.

He confessed to be responsible for the kidnapping reported at Okpu Umuobo village and accused his friend, Kingsley, of luring him into the business.

But Kingsley, a furniture maker at Ogwa denied the allegation. He said Ukachukwu persuaded him to travel to Aba to beg his wife (Gold) to come back home.

Mr. and Mrs. Uche thanked God, the vigilante, Army and police for their efforts in helping them reunite with their child.