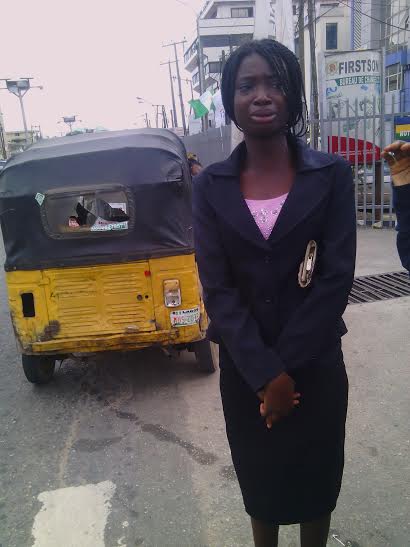 The sobbing lady pictured above was duped yesterday at a GTBank on Allen Avenue Ikeja.

The lady who identified herself as Rukayat was seen crying inside the bank after a man disguised as GTB banker approached her and other customers on a queue.

“He claimed to be an official of the bank and demanded if I had a bank verification number, to which I answered no. He collected the money for ease of the transaction and gave me a verification form to fill”. When I was filling the form, the man went to the counter to talk to a teller.”

To cut the long story short, the man pretending to be a banker later disappeared with Rukayat’s bos’s N14,000.

“The money belongs to my boss. I have just been employed two weeks ago and I don’t know where to get a refund for her,” she said sobbingly.

A bank security guard reportedly ordered her out of the banking hall.