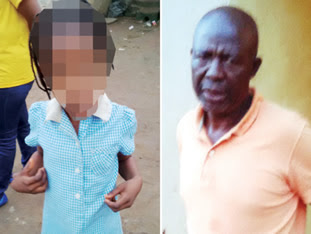 In another case that has highlighted the increasing child sexual abuses in Nigeria, a 65-year-old landlord, in Akowonjo area of Lagos, Mr. Ganiyu Sani, has allegedly raped a seven-year-old girl, Blessing. But this time, the parents of the victim believe he did it for ritual purposes.

The civil servant mother of the victim told our correspondent that on Monday, August 17, 2015, when she got back from work and was having dinner with her children, Blessings started to touch her crotch and complain of pain.

“I felt the part she was touching and asked what was wrong with her. I thought she was referring to her lower abdomen and believed it must be stomach ache. But she insisted that it was her private part.

“I asked if she fell down and hurt herself but she simply shook her head. I asked if someone hit her there while she was playing with other children in the neighbourhood, she said no. I started suspecting there was something bigger than what she was telling me.

“I pleaded with her to tell me what happened. That was when she told me about what Baba did. I could not contain my anger. I was shocked, angry and sad at the same time that such an old man could do such a thing to my daughter. My daughter had no reason to lie.”

Blessing’s father, a trader from Ebonyi State, works in the Eastern part of the country while his wife and the children live in Lagos because of his wife’s work.

He was in the East when he received a call from his wife about what had happened to their daughter. He told his wife to take a neighbour along to go and confront Baba, who denied everything immediately.

Baba Sani, a landlord who lives on renting out Danfo buses to commercial bus drivers, lives just two houses away from Blessing’s parents.

Blessing, an exuberant, fair complexioned girl, was not shy when our correspondent spoke with her about what Baba Sani did to her.

She explained that the old man usually crossed from his house to fetch water from a tap beside their house.

She said, “On Friday, my mummy was not around and he came to fetch water (like he normally does). When he was passing in the front of our house, he asked me to follow him to come and collect biscuit.

“When I got to Baba’s house, he put off my shoes and carried me to his bed. He removed my pants and lay on my chest. When I was shouting, he said I should not shout, that he would give me biscuit and N20.

“When he finished, I saw blood coming out and Baba used a cloth to clean it. He said I should not tell anybody. He gave me biscuit and N20.”

Shockingly, without Blessing’s mother knowing, Baba Sani allegedly called the girl and raped her again the following day, a Saturday.

To dispel doubts about the girl’s allegation, she was asked to explain the location of Baba Sani’s bedroom inside the building and her description was found to be exact description when our correspondent eventually paid Baba Sani a visit.

Our correspondent spoke with Baba Sani in company of the director of Esther Child Rights Foundation, Esther Ogwu, who the case was initially reported to by the girl’s parents.

The man, who walked with the gait of someone approaching senility, started off by saying Blessing’s mother was an acquaintance, even though the girl’s mother said she had never had reason to speak to him before.

Baba Sani said, “The girl’s mother once approached me about a month ago to lend her N500. She sent her daughter to collect it and I gave it to them. Later, the girl with her younger sister came to my house that Friday to ask for money and I gave them N20.

“I did not do anything. I don’t know anything about what they have accused me of. God is my witness. I am just surprised about why I am the one the girl is accusing of such a thing.”

When asked how the girl could possibly know where his bedroom was in the house, the old man said he had no idea.

Blessing’s mother said she had many other co-tenants and neighbours and said she couldn’t have imagined asking Baba Sani to lend her any money.

A test conducted at the Mirabel Sexual Assault Referral Centre at the Lagos State University Teaching Hospital, Ikeja, Lagos, confirmed that the girl was indeed raped as lacerations on her private part were consistent with sexual assault.

The case was reported at the Gowon Estate Police Division.

Ogwu explained to our correspondent that she was disappointed that initially the police did not handle the case as if they were interested in prosecuting the man. She said rather than charge him to court, they released him from custody despite the fact that they had got the report of the test conducted on the girl.

The child rights activist said, “According to the information I was given, the man was pretending that he was insane when he was arrested. Everybody in the neighbourhood could testify that nothing was wrong with him.

“It should not be too hard to enforce the law in this case. The Child Rights Act is there. It is unfortunate that the mother of the child did not monitor her daughter well. There are so many young children in that neighbourhood that could have been victims of the man.”

Baba Sani was arraigned before an Ikeja family court on charges of defilement and child abuse on Monday. He was remanded in prison custody while the case was adjourned till September 4, 2015.