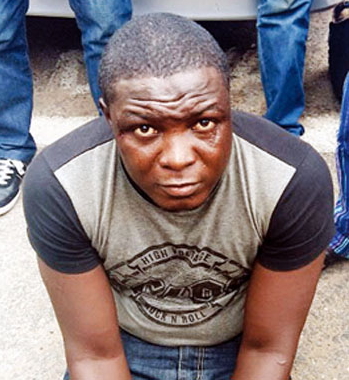 August 25, 2016 – Picture: Lagos Most Wanted Eiye Cult Leader Arrested For Killing Over 80 People, Oriyomi Balogun Aka Small Jopron Tells Police He Is Not Sorry For Murder

A notorious cultist has been arrested in Lagos over the murder of 80 innocent people.

The suspect identified as Oriyomi Balogun popularly called Small Jopron or J-Prompt has reportedly murdered over 80 residents of Lagos and Ogun state during supremacy battle between Eiye fraternity and Aiye cult group.

While claiming his innocence, the suspect denied killing over 80 people, he said he only murdered 2 persons.

“I am Small JP, I am the leader of Eiye Fraternity in Lagos. I have been wanted by the police, but, I am not as bad as they are painting me. The police said that I have killed many people. That is not true. I only killed two persons but, I am not regretting it because, we were at war. It was like a soldier killing his enemy.

“Eiye and Aiye are always fighting the battle of supremacy. It is either one of us offended another person from another group. Well, we fought with dangerous weapons, so, somebody must die. I have only killed two persons, but my men may have killed more. The police should not put all the killings on my head.

“What I want the police to know is that some of my members were also killed during confrontations. For the two persons that I killed, I had atoned for my sins because, I have gone to the prisons for the offence. I just think that I am being victimised because, I am not as bad as the police are claiming.”

Lagos Police CP Owoseni said Oriyomi is the most wanted cult leader in the state.

He has been declared wanted for armed robbery, kidnap and several murder cases.

His gang members usually operate in Shomolu, Bariga and other parts of Ogun State.

Continue Reading
You may also like...
Related Topics:arrested, cult, lagos, leader, most, wanted