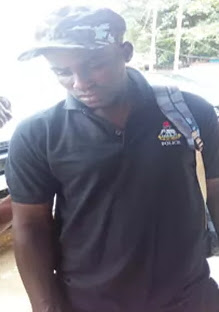 Nathaniel Benjamin, a 33-year-old Lagos resident is now in the custody of the police in Lagos for alleged impersonation. The suspect was arrested by X-squad team of the state Police Command at Alakija area of Ojo following tip-off from members of the public.

The suspect, who hails from Kogi State, said he was once a driver but the uniform belonged to his late police brother. He said:

“When I was working as a private driver at the Festac Town area of Lagos, my monthly salary was N30,000 but the money was not enough to cater for my needs.

That was when I decided to wear my late brother’s uniform and dress as a police officer so that when I board a commercial vehicle, the driver will not collect fare from me.

“All efforts to get a well-paying job have been futile.

My desperation to save money to carter for my family needs prompted me to wear the police uniform. “I love police work but all my efforts to become a policeman met a brick wall.

“I was neither using the police uniform to defraud people nor to escort heavy duty vehicles. I was using it to get free transportation. My late brother had not spent one year in the police when he died in an auto accident last year.

After his burial, I decided to use his uniform in my custody. I have been wearing it for about three months.” “Because of my passion for the police job, I applied for the recent recruitment exercise and I have been praying to God to help me get enlisted into the force. I don’t know wearing the uniform is an offence. It was my love for the force that made me to wear it.”