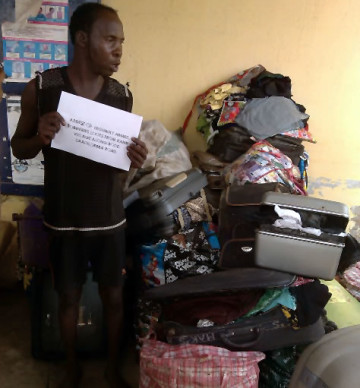 A suspect, Mr. Umoru Issa, has been arrested in connection with some apparels snatched by an eight-man gang of armed robbers along the Bode-Saadu/Jebba Road of Kwara State.

While parading the suspect on Wednesday, the Police Public Relations Officer, Kwara State Command, Mr. Ajayi Okasanmi, said a victim, Mr. Ado Abdullahi, who was attacked by the robbers, identified Issa as being in possession of his stolen apparel.

The PPRO said Abdullahi was robbed while travelling from Kambi to Kano.

Okasanmi said the police anti-robbery team had on August 10, along Bode-Saadu/Jebba Road dislodged an eight-man robbery gang. He stated that one of the suspected armed robbers was seriously wounded during the exchange of gunfire with the police.

He added that the wounded victim later died in an unnamed hospital while the police recovered one locally made gun from the bandit.

Okasanmi said the command’s Intelligence and Investigation Department embarked on a search of Kambi along Bode-Saadu Road, and later arrested Issa. He said when the suspect’s house was searched, several travelling bags containing apparels and other items suspected to have been snatched from the unsuspecting commuter were recovered from his house.

He said the police had commenced a thorough and discrete investigation into the matter in order to apprehend the fleeing robbery suspects.

But Issa denied that the boxes and clothes found in his room were stolen. He claimed that some belonged to him while others belong to his daughter.

“I am not a thief and I cannot steal. Some of these boxes belong to my daughter while others are mine. The police have only lied against me,” he said.

Continue Reading
You may also like...
Related Topics:fatal, kwara, robbery