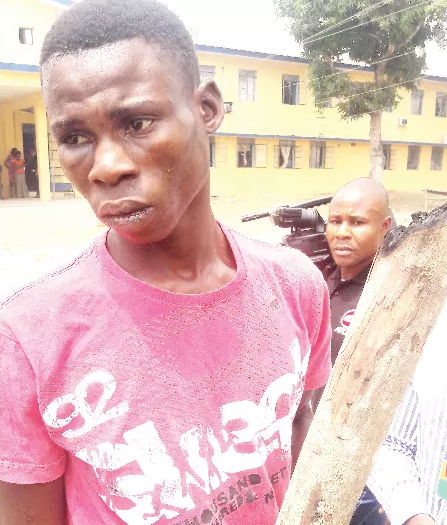 The suspect allegedly beat his father to death with firewood over a squabble between the deceased and his (Nkefre’s) mother (name withheld).

Nkefre, however, said he did not kill his father intentionally. Briefing journalists yesterday at the Command Headquarters in Ikot-Akpanabia, the state Police Public Relations Officer (PPRO), Cordelia Nwawe, said the suspect would be charged for murder.

However, the suspect told journalists amid tears that he had been abandoned by family and left to fend for himself; going from one place to another to cut palm fruits for survival.

He said that on that fateful day he was going home when he met his father beating his mother over a misunderstanding which has become too frequent in the family. According to him, he hit his father with the stick in his right hand and the man felled down.

The man was said to have been rushed to the hospital but the news came shortly after wards that he had died. “I did not do it intentionally. Please, forgive me,’’ he pleaded with the police.

Meanwhile, the police also unveiled the new operational outfit of the Federal Special Anti-Robbery Squad (FSARS) as well as presented certificates of honour to five policemen for gallantry and commitment to duty.

Addressing members of the special squad, the state Police Commissioner, Murtal Mani, charged them to live up to their billing and ensure that Akwa Ibom people go to sleep with their eyes closed.

He charged the rebranded FSARS to consolidate on its records of ensuring that kidnapping and armed robbery were reduced to the barest minimum in the state. Mani, who later presented certificates of honour to the five recipients, charged them to use the recognition as a mean to spur them to greater commitment to duty.