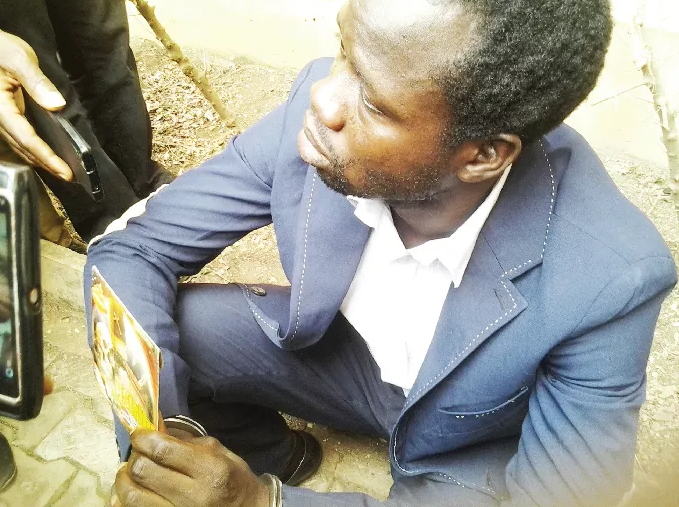 Festus Balogun, a 44-year-old suspected fraudster has told the police in Akure, Ondo State that he usually blackmails men of God to make ends meet.

According to him, his victims include Pastor Samuel Abiara and Prophet Samson Oluwamodede. Balogun, who has several names such as Festus Emmanuel, Smart and Olabode, was nabbed alongside other suspects.

The state Commissioner for Police, Mr. Mike Ogbodu, said the suspect, who resided at No 5, Ipobe Street, Cotonou, was arrested on January 28. Ogbodu, who spoke while parading suspected criminals yesterday, disclosed that the suspect had been on the watch list of the police.

He said: “Some prominent men of God numbering 12 namely: Pastor Samson Oluwamodede of Prayer Centre Church of God, Idanre Road, Akure and Pastor Samuel Kayode Abiara, the General Evangelist of Christ Apostolic Church (CAC) Worldwide and 10 others engaged him to kill for them to gain spiritual power.” The police chief noted that the suspect denied all the claims he made in the video clip during the course of investigation.

According to him, Balogun confessed that he was pushed into the crime for monetary gains. “He also denied that he ever killed for any of the pastors as alleged neither has he ever been in contact with any one of them.

“It is pertinent to mention that the content of the video CD has caused suspicion and disaffection in the churches mentioned. Our detectives are presently on the trail of the producer of the video CD.

“However, he confessed to the crime saying he engaged in the act in order to feed his family after he left prison some years ago. He said he never met any of the pastors but wanted to use their names to make money,” the commissioner said.

Balogun said the marketer of the video promised to give him N300, 000 but did not get any money until he was caught.

The blackmailer, Balogun, while speaking with journalists, confessed to the crime and admitted that he was convicted for cultism and was sent to Kirikiri Maximum Prison.