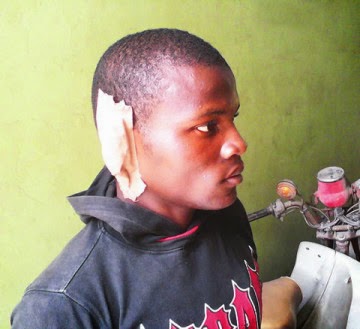 The young man pictured above got a big bite on the ear from his angry step dad over the weekend.

The suspect identified as 30-year-old Udeme Inim bites off Christopher Bassey’s ear after he tried to defend his mother during a domestic assault case that happened on Saturday around 11am on Asaka Street, off Abule-Nla Road, Ebute Meta West.

The Akwa Ibom indigene reportedly ran out of the house after his wife raised an alarm while the victim was rushed to a nearby hospital with his ear kept in a transparent nylon but unfortunately the ear could not be reattached.

“On that day, he was fighting with my mum and at a point he began to destroy some of our property. It was too much for me to bear.

“So I tried to stop him and that was when he attacked me and bit off my ear.” – the victim narrates his ordeal at the hospital

The suspect who reportedly ran out of the house unclad was clothed by police officers at the Ebute Metta division.