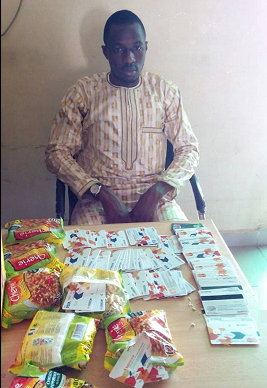 A Gold seller has been caught by the EFCC while trying to flee Nigeria for China with 130 fully loaded ATM cards.

Preliminary investigation revealed that the 130 ATM cards seized from the suspect identified as Muhammad Ibrahim is valued over 14.7 million Naira.

The suspect was caught at Aminu Kano Airport while trying travel to China with passport No  09PC71337.

He is a popular jewelry seller at Kasuwan Kofar Wambai market in Kano.