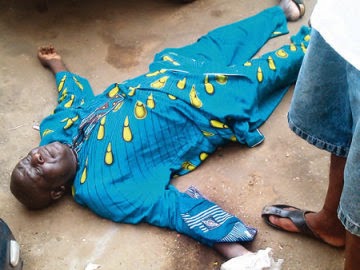 The man pictured above slumped and died on Thursday around Pen Cinema roundabout in Agege area of Lagos of Calcium overdose.

The man said to be in his early 70s was said to have slumped and died when nobody came to his rescue.

The deceased identified as Oriyomi Simon left his home in Agbado area of Lagos around 9am on Thursday to visit a friend in Agege when he suddenly slumped a few steps away from the Pen Cinema Police station.

A policeman who identified himself as detective searched his body and found a bottle of calcium tablets and cell phone. His wife was later called to the scene. On sighting her hubby’s corpse, Florence broke into tears, saying she was worried when she couldn’t reach him on phone since 11:30am.

The inscriptions on the bottle of the drug that was found with him read in part, “Calcium 500mg. Take one tablet to two three times daily, preferably with meals. Do not exceed stated dosage. Each tablet contains 500g.”

Without any autopsy, the detective said the man likely died of calcium drug overdose.