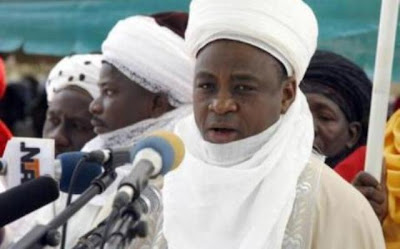 While addressing journalists on Sunday, the Sultan of Sokoto, Alhaji Mohammed Sa’ad Abubakar III, lamented the attack that killed over 100 muslim worshippers at Kano Central Mosque on Friday.

He blamed the government for the bombings in the north, noting that it appeared the government wanted to justify the essence of the extension of the emergency rule in the three North-East states of Adamawa, Borno and Yobe.

The JNI scribe said, “But must blood be spilled to justify the extension of state of emergency? Why is it that any time the ineffective state of emergency is about to elapse and/or an extension is being sought, attacks are carried out with sophistication?

“Are we really aware of the repercussions of spilling the blood of innocent souls? What is the essence of the government’s war on terror and its attendant huge budget? Where are the intelligence and security agencies?

“Can we afford to continue relying on them for our safety and security? Why? We ask ad infinitum with no satisfactory answers.

“Without mincing words, Nigeria is being misgoverned to the brink!”

“JNI will not be deterred nor cowed in observing the way and manner Muslims are being killed in Nigeria, particularly in the North,” he added.