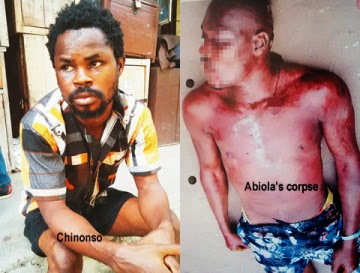 April 26, 2015 – Picture: Man Who Killed Co-tenant In Lagos Last Sunday Says Evil Spirit Used His Hand To Grab A Knife He Used To Kill His Victim

For 30-year-old Nweke Chinonso, the tragic events of Sunday, April 19, 2015, could as well be the handiwork of a spiritual influence or force beyond his control.

“I do not know the spirit that got inside me that day,” he began.

Chinonso, an Imo State indigene, was calm as he explained that he should be seen as the victim of a supernatural force that took control of him and made him to kill his neighbour, Kunle Abiola.

“I no longer go to church,” he said. “I was relaxing in the front of my apartment at 100, Mba Street, Ajegunle, when my neighbours, Ismail and Kunle (Abiola), told me to join them where they were sitting. I told them I would not and they started to foment trouble.

“I did not want to associate with them because I don’t speak their language and I can’t trust them. But while they were troubling me where I sat, Ismail pinned my arms behind me and Kunle slapped me.

“Immediately he slapped me, I could not control myself anymore, it was like I was on remote control as a spirit pushed me to go and take a kitchen knife. I rushed in and took the knife, came back outside and stabbed Kunle.”

The deceased was stabbed twice – in the chest and jaw.

“There was even a time I went to a drinking joint in our area and saw him (Abiola) there. As soon as I sat down, he came over and challenged me for coming to the same joint where he drank. He slapped me right there and I could not do anything,” Chinonso said.

As soon as Chinonso stabbed Abiola, he slumped and was rushed to the hospital as blood gushed from his chest and jaw.

Residents instantly restrained Chinonso, tied him up and beat him as police were alerted to the incident. Abiola was pronounced dead on arrival at the hospital

However, residents who spoke with our correspondent, said Chinonso’s version of the story was all lies.

A resident, Saheed Adebisi, said the incident started when a fight broke out between Ismail and Chinonso but Abiola only attempted to separate them when he was stabbed.

“Chinonso stabbed him because he believed that Abiola was on the side of Ismail,” he said.

Continue Reading
You may also like...
Related Topics:killed, lagos