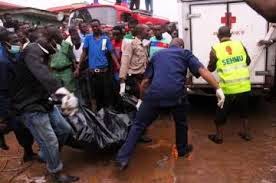 At least 3 people died today at Obayator village along the popular Benin-Warri Highway.

The vehicles were heading to Benin from Warri when the Hiace carrying obituary posters of a woman lost control at high speed and rammed into the Sienna bus from behind.

The collision caused the 2 vehicles to skid off the road

Both vehicles were travelling towards Benin City from Warri end of the double carriage way.

One witness who identified himself simply as Joseph, said one of the injured passengers said they were travelling to Ekpoma, administrative headquarters of Esan West local government area of Edo State for burial.

The corpses of the deceased have been deposited at a mortuary in the area. The injured were rushed to Stella Obasanjo hospital in Benin city for treatment.