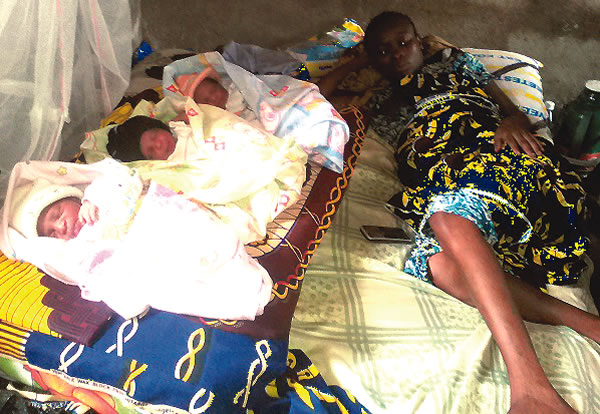 The indigene of Eleme in Rivers State now a mother of 10 gave birth around 1am on Monday at their home without going through the knives.

She reportedly self-delivered her first child before her husband called a local nurse to help her deliver the rest.

Narrating how she was delivered of the remaining two babies, Mrs. Etoor, said

“I gave birth to the babies in the house. I was not feeling labour; I was just calling on my husband to give me water to take my bath. I sat back and lay down. Just as I was sleeping, water began to rush out.

“Then I asked my husband to run out and bring somebody to take me to the hospital. But then he should ask his younger brother to come and stay with me. Before the brother came, it was like something was coming out of me.

“I asked my children to help me stay on the ground. I was calling my first daughter, Faith, to help me. Just as I lay down with my back on the ground, I started feeling the baby trying to come out.

“I pushed and the first baby came out. So, I called on my husband to bring somebody in to help me. With the help, I was able to be delivered of the other two babies.”

Blessing Etoor and her husband, John, a small scale farmer however, called for financial support from government and public-spirited individuals.

Man Kills Girlfriend In Hotel In Minna Niger State Because She Infected Him With Gonorrhea
Nigerian Actor Yemi Solade: I Divorced My First Wife Because I’m Too Afrocentric To Live Abroad