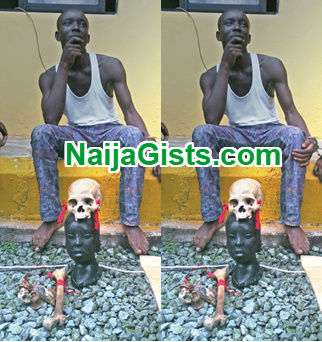 September 21, 2016 – Picture: See The Herbalist Who Told Police His Charm Has Travelled In Abia State

28-year-old Oluebube Nwachuku, a very young and bold native doctor told police yesterday while he was being paraded that officers who raided his house in Umuahia area of Abia state on Sunday were able to arrest him because his charm has travelled.

Nwachukwu who claimed to have inherited a human skull and bone from his late uncle described his arrest as unlawful.

According to him, there is no law that permits police to arrest native doctors.