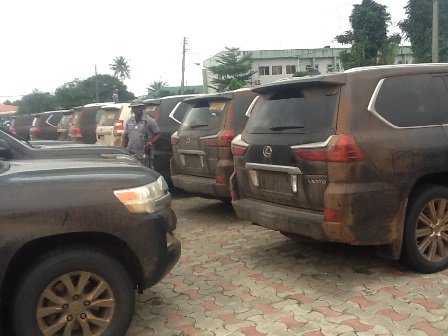 The NCS has impounded 37 brand new exotic vehicles estimated at N1.3billion after bursting a smuggling ring.

Addressing reporters at the Customs Training School in Lagos, Tuesday, the Comptroller-General of Customs (CGC) Col. Hamed Ali (Rtd) said the seizures were made by officers and men of the Federal Operation Unit (FOU) Zone ‘A’ Ikeja and the CGC Compliance Team in Lagos.

Findings revealed that some of the smugglers used the number plates on some of the new vehicles as a decoy to beat Customs’ checks. But unknown to them, Customs officials had been monitoring their movement for days before swooping on them.

Sources closed to the Service also said when some of the smugglers saw the Customs team along the unapproved routes, they abandoned the vehicles and jumped into the bush to evade arrest.

Seventeen suspects were arrested in connection with the seizures. 11 of the suspects, it was learnt, have been released on bail, while six are still in detention.