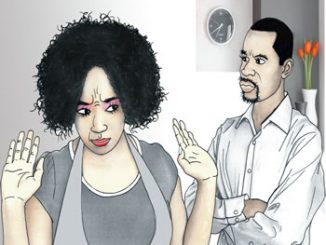 There was a mid drama at an Idi-Ogungun Customary Court, Agodi-Ibadan on Tuesday when a woman, Suriat Adewale, rejected custody of her three children including a 12-month-old baby.

Suriat had protested the decision of the court, granting her custody of the children in a divorce suit instituted by her husband, Suleiman Adewale, saying she had no means of livelihood and would not be able to cater for them.

The two other children are aged five and three.

The court did not, however, entertain her plea, a situation which made her to attempt to abandon the kids in court but was prevented.

Earlier, Chief Mukaila Balogun, the president of the court, had dissolved the union and ordered the three kids of the couple to be in the custody of Suriat.

Balogun said the kids were too young to be left in the custody of the husband, stressing that at that age, the mother was in the best position to take care of them effectively.

He also ordered the plaintiff to pay N10, 000 monthly to Suriat for the upkeep of the three children and for both parties to take responsibility of the kids’ welfare.

In the suit, the husband asked the court to dissolve the 15-year-old union on the grounds that Suriat was disrespectful and had abandoned her matrimonial home for five months, leaving behind the three children.

Adewale told the court that Suriat packed out of her matrimonial home sometimes in September 2016 with the kids but returned them last February.

“I pleaded with her to allow the children stay with her for proper care but she refused and asked me to look for a nanny who would take care of the children.

“It has not been easy for me since, because the third child was just seven months old when she abandoned the kids for me.

“I pray the court to dissolve the union and also give her custody of the children so that I would be able to face my business and have money to take care of the children,“ he pleaded.

In her defence, Suriat prayed the court not to dissolve the marriage, saying she was forced to leave her matrimonial home nine months ago to avoid untimely death due to inhuman treatment by her husband.

“Adewale was in the habit of beating and accusing me of committing adultery; I decided to stay away from him, I intend going back to him when I see changes in his character,“ the woman said.