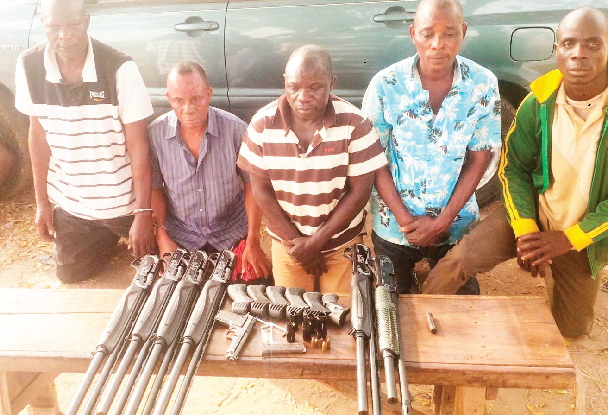 The police arrested eight suspects, including an Army lance corporal, for allegedly supplying arms and ammunition to the bank robbers. Aside the arrest of the arms suppliers, SIRT also arrested seven members of the robbery gang.

The crackdown on the arms suppliers was led by Mr. Abba Kyari, a Chief Superintendent of Police and officials of Defence Intelligence. Six automatic pump action rifles, a pistol and some cartridges were recovered from the suspects. Detectives gathered that most of the arms sold to the robbers were used for bank robberies, kidnapping and pipeline vandalism. A member of the robbery gang told SIRT operatives that his gang received large supplies of arms and ammunition from the soldier.

The soldier was posted to Borno State to fight the Boko Haram. It was also revealed that the soldier used to conceal weapons inside food items heading to Lagos from Borno. The gang, which was also involved in pipeline vandalism at Ikorodu and Ijegemo areas of Lagos, would receive the ‘goods’ at a designated venue. The gang would later credit the soldier’s bank account. The robbers used to come through the waterways, dressed in military camouflage uniforms. They had attacked different banks, where they carted away millions of naira after blowing up banks entrance doors with dynamites.

In most of their operations, they killed women, children and policemen. According to the police, the eight suspects, Opeyemi Balogun, Ayodeji Famileye, Michael Adebayo, Edward Paul, Bayo Olaoye, Ahmed Mosuru, Olamilekan Omopeji and Emmanuel Ebo (the soldier), were picked at various locations in Lagos, Ogun, Oyo and Borno states.

A police source said: “The lance corporal was picked at his duty post in Maiduguri, Borno State by men of the Defence Intelligence. The officials received intelligence report of his activities from the police.

He is currently undergoing interrogation at the Defence Headquarters, Abuja.” The arms suppliers were alleged to have sold no fewer than 15 automatic pump action rifles, a pistol and several cartridges to the gang members.

Stating their own side, the arms suppliers insisted they did not know the arms and ammunition bought from them would be used for robbery. According to them, they thought the robbers were soldiers as they were normally seen clad in military fatigue. Famileye, 40, the link between the robbers and arms dealers, said he sold an automatic rifle to the gang for N230,000 and he made over N60,000 on each rifle.

He said: “I used to demand extra N30,000 from the gang to procure firearms’ licence for each rifle sold to the gang. I’m not an arms dealer. I have a friend in Oyo State, Mike. He sells arms. I don’t know whether he is a licensed dealer or not.

“In 2012, during the fuel subsidy protest in Lagos, I went to Ikorodu to buy fuel and met Opeyemi Balogun. Balogun sold fuel to me and during our conversation; he told me that he was into security.”