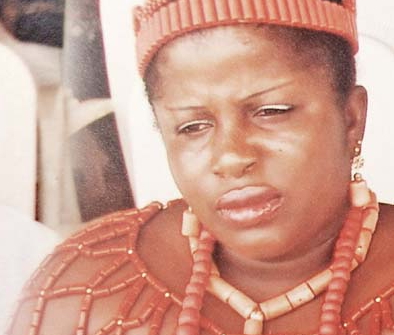 This is not the best of times for Queen, Okwukwe Nwoko, who was allegedly ejected from the palace over allegation of infidelity.

Okwukwe got married to His Royal Majesty, Obi Agbogidi Nwoko III, of Idumuje-Ugboko Kingdom in Aniocha North Local Government Area of Delta State in 2010 as the fourth wife but ended up being the only wife to the 90-year-old monarch as two of the previous wives were divorced while the third died some years ago.

Trouble started three years ago for her when members of the royal family, allegedly cham­pioned by the Crown Prince, Nonso Nwoko accused Okwuk­we of infidelity and consequently ejected her from the palace.

Members of the family con­tended that the monarch was not responsible for the pregnancy that resulted in the birth of a baby girl by Okwukwe, after the alleged act of infidelity. The girl is now three years old.

Although efforts to contact Prince Nonso failed, a member of the royal family, Prince Obi Nwoko who spoke with Sunday Sun reporter said Okwukwe was “caught watching blue film” at the palace, adding that her mind was so corrupt and, therefore, not fit to be the wife of the king.

“She was sent out because of pregnancy from outside. We have evidence to show for it. Many issues were raised before she was sent out. She was proved to have committed the offence before we arrived at that deci­sion. It was collectively agreed that she be sent out. It was not a one-man decision,” Prince Obi Nwoko said.

Prince Obi insisted that the last child of the king is an 11- year old girl, Celine, and not the child being paraded by the ejected queen, adding that the royal household rejected the idea of going for DNA test due to several unresolved issues.

But Okwukwe stoutly denied the allegations, and maintained that she was unjustly ejected from the palace to create room for the Crown Prince to succeed his father while he is still alive but in miserable condition due to lack of care.

Narrating her ordeal in the hands of her accusers, Okwukwe said that one morning when she drove into the palace grounds, she was told to leave the palace for good, adding that efforts to address perceived grievances were rebuffed.

Her words: “It was on October 1, 2012, when I was told to leave the palace. The boys said that Nonso Nwoko, first son of the Obi, the Crown Prince, said I should leave the palace. Prince Martins Nwoko, brother of the Obi, all joined hands to force me out. They sent two boys to drive away me from the palace. They threw away my property. When my family members went to the palace, they drove them all away. They said they didn’t want to see any of us in the palace.

“I was in the fifth month of pregnancy then, and ever since, I have not seen my husband and he has not seen me. Even when I delivered, I sent a message to the Obi that I had delivered, but one of his brothers said the Obi and I do not have any connection. They called the baby a bastard and stressed that they don’t want a bastard in the palace. They said they do not want any woman to be close to the Obi. Now the Obi is suffering, and there is nobody to help him, no wife. After that the boys seized my car, went to the market square, carried everything from my store and padlocked the store.

“Later, the second daughter of the Obi, Uzor, said they don’t want any woman near the palace again, that their father has been ruling for a long time and that anybody trying to send me back to the palace would fail.

“They blocked the joint account I was using with my husband. All the places we used to collect money, they blocked everywhere, giving me no access to any money again. They said nobody would help me. My father is late, and so there is nobody who can help me to fight the battle.

“My husband is now suffering. Any man that comes to me, they would warn the man, saying why are you going near Obi’s wife? But they are not maintaining me as Obi’s wife. They seized my car, my land and everything that is due to me in the palace,” she alleged.

According to her, when she offered to have the child undergo DNA test to ascertain the paterni­ty of the baby or she be allowed to take the traditional oath to prove her innocence, her accus­ers refused and insisted on the ejection based on the allegation of infidelity.

She appealed to the Obi-in-Council, opinion leaders and concerned stakeholders to intervene.

“I want to go back to the palace and take care of my husband. The law is that as soon as you are married to the Obi legally, you cannot marry another person,” Okwukwe said. A community source said that the relationship between the em­battled queen and the monarch was cordial before the recent development.

The source said: “She is a victim of other people’s manip­ulation. They conspired against her because of her influence in the community. She has been organizing women in the area. And so, people seeking power do not like her. Their foothold was that when she was pregnant, His Royal Majesty was too old to impregnate her and as such they concluded that she got pregnant outside the palace.”

According to the source, the Obi was not allowed to even address the matter, alleging that those around him were shielding him from other members of the community while he was silently suffering in the hands of his family members.