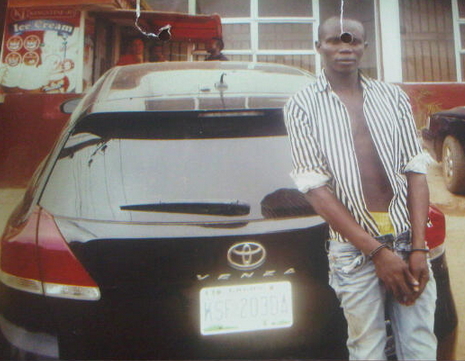 Pictured above is a notorious car thief who specializes in stealing SUVs parked in houses across Lagos.

26-year-old Somadina Enyiobi from Ora Ifite in Anambra was arrested and charged with conspiracy and stealing before a Magistrates’ court in Isolo today for stealing a Venza SUV parked in the owners compound at Greenfield Estate along Ago Palace way in Okota last week.

The SUV with registration number KSF 203 DA belongs to Godwin Chukwudum who resides in the estate.

According to Enyiobi, he went there with two of his gang members he identified as Uchechukwu and Emmanuel and forced Chukwudum’s housegirl to bring the key of the SUV to them.

He said when she refused, they threatened to kill her and she eventually showed them where the key was kept. They collected the key, tied the housegirl’s mouth, legs and mouth and locked her inside the flat and attempted to drive the SUV out of the estate.

Vigilant security guards who knew the SUV owner stopped them at the estate gate and asked where he was driving the SUV to.

When he couldn’t provide a satisfactory answer, one of the security guards alerted the owner who brought police to arrest him as two of his gang members escaped.

He was sentenced to 2 years behind bars today with no option of bail.