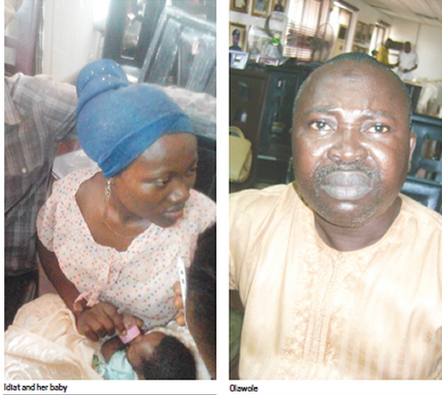 A desperate student of Offa Polytechnic, Kwara state has sold her 3-week-old baby for N70K

The suspect identified as Idiat Babatunde reportedly handed her baby over to a traditional medical doctor, Onalaja Olawole who in turn sold the innocent baby to a childless couple in Lagos.

Idiat agreed to sell her baby to one Mr & Mrs Ayogbemile for N300,000 but they could only raise N136,000 which she later agreed to collect from them.

The deal was exposed by the vigilant landlord of the childless couple who alerted the police.

Police investigation exposed Dr Onalaja who reportedly paid Idiat N70,000 out of the N136,000 the couple paid him.

“I delivered the baby on September 5, but because of issues of missing script and clearance, I needed to rush down to my school in Kwara State.

I left for Kwara on September 12. I did not want anything to affect my going for my National Youth Service. I left my baby with the doctor because he and my husband are friends. I know that his wife had just delivered a baby and she would be able to take care of my baby. I never knew he would sell my baby. I trusted him.”

“I’ve known the ‘doctor’ since 2013. He had been treating me because I used to have miscarriages. He called me last year that I should adopt a child but I said no. Soon after, my husband and I had a quarrel and we separated. “The ‘doctor’ called me last week. He said that he had a baby girl for me. I did not know that the baby’s mother was not aware of the deal. The ‘doctor’ said he would prepare papers for us at Alausa, Ikeja.”

The state Police Public Relations Officer (PPRO), Joe Offor, said that Idiat sold the baby out of desperation. He said that Idiat had a fall out with her lover and was struggling alone.
He added: “It was an outright sale. Idiat collected the money.