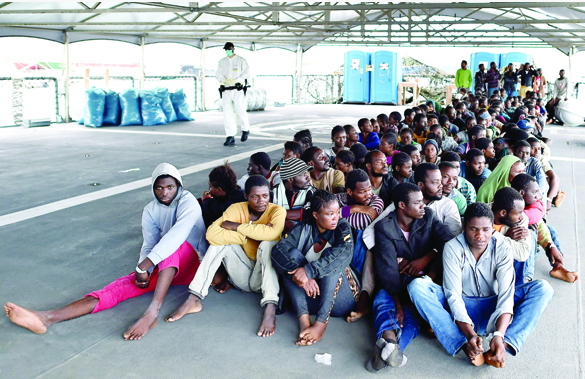 Over 140 migrants and refugees, mainly from Nigeria, Ghana, Senegal and Sierra Leone who were transported by the German navy frigate Werra as part of the European external action service EU Navfor Med, wait to disembark at the Augusta harbour in eastern Italy…yesterday.

No fewer than 500 migrants were rescued in seven operations launched at the weekend in the Mediterranean, the Italian coastguard said.

A spokesman told French News Agency (AFP) yesterday that four of the rescue operations had already wound up but the others were ongoing.

The migrants mainly came from Nigeria, Ghana, Senegal and Sierra Leone and left Libya three days earlier. They were rescued about 80 kilometres off the Libyan coast.