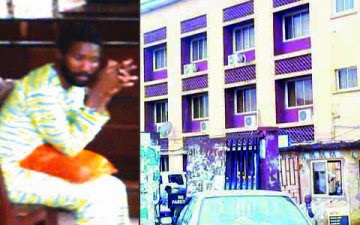 A Pastor from Kwara State has been arrested for participating in series of car robbery operations at Ojota Bus stop in Lagos.

Adebambo Adetunji, a 37-year-old district Pastor in Ilorin was accused to be among gang members that robbed motorists at gunpoint in Lagos between April and July 2014.

The pastor was arrested after one of his victims reported the attack to the police.

The other members of the syndicate are still at large.

The prosecutor, Inspector Nurudeen Thomas, on Thursday, brought the suspect, who hails from Osun State, before the Magistrate, Mrs. M.O. Oshodi, on three counts bordering on armed robbery.

Below is a copy of the charges read to him in court on Thursday:

“That you, and others now at large on July 6, 2014 at about 5.30pm at Ojota Bus stop in the aforementioned magisterial district did conspire among yourselves to commit felony to wit; armed robbery.

“That you and others now at large on the same date, time and place in the aforesaid magisterial district while armed with guns and cutlasses did rob one Toyota Camry 2008 model with registration number MUS 413 BH valued N2.3m property of one Oluwatoyin Badmus.”

On hearing the charges, Pastor Adetunji burst into tears.

His case has been adjourned till the 3rd of December for further hearing.