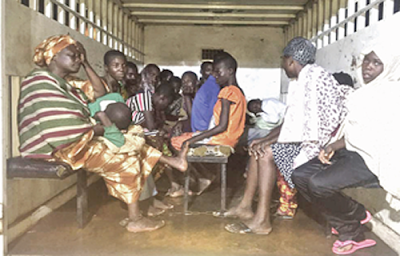 The officials of Lagos State Police command have arrested a Pastor identified as Emmanuel Adeyemi for allegedly chaining his 17-year-old son, Adedoyin Toba and 27 other people looking for healing.

The victims  (15 adults & 12 children) were chained at the premises of a house at Oyinbo Unity Estate in Oke Ira area of Ojodu Lagos before police stormed the place following a tip off by vigilant residents.

While defending the suspect, his second wife, Tope said police should release her husband because he has a license for the healing center. 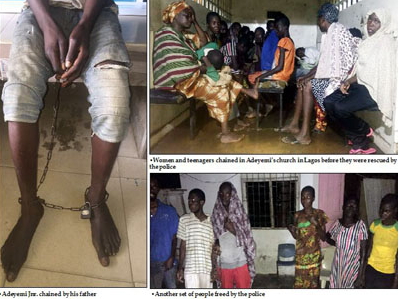 She further said Adedoyin Toba was chained because the evil spirits his father chased out of his clients have possessed him.

“Toba’s father chained him on Thursday so that he can do three days’ deliverance on him. The deliverance would have been completed on Saturday but on Friday morning, police people from Area ‘G’ came here and arrested my husband. “He chained Toba because he is always running from home. The other time he ran to Sagamu and after sometime he was brought home.

One week later, he ran to Ibadan and he was found after one month. The last time he ran to Powerline and stayed there for two weeks before he was brought home.”