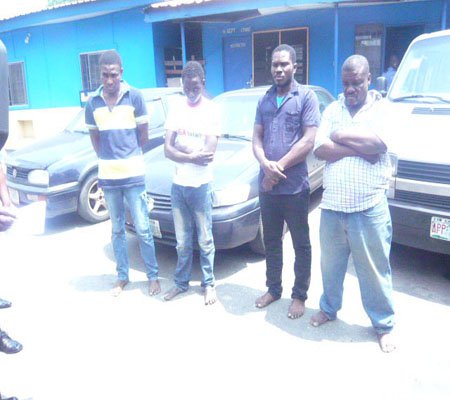 A 4-man robbery gang terrorising motorists in Lagos and its environs have been arrested.

Assistant Inspector-General of Police (AIG) Zone II Onikan, Lagos Joseph Mbu said the suspects were caught around Ipaja in Lagos following a tip off on June 8.

Mbu said two of the suspects – Paul and Ezeala who were first arrested by the Zonal Special Anti-Robbery Squad (SARS) operatives led the police to where others were nabbed.

Mbu said Paul confessed under interrogation to have stolen many parked vehicles within Lagos and environs and sold about 13 of them to Ezeala.

He said Ade forged customs and other vehicles papers for the stolen vehicles, adding that Kasali acted as mechanic.

Ezeala, from Orlu in Imo State said: “My original work was repairing of electronics, but when I found out that there is quick wealth in dealing in stolen vehicles, I switched over to selling cars. I bought about 13 cars from Paul between N200,000 and N300,000 each with some having market prices of N800,000, N1.5million or more.

“The gain was highly tempting. Initially the criminal suppliers used to tell me that they bought the cars from Cotonou but I later discovered that they were snatched but because of the money I was getting I could not back out and, to leave the gang is more dangerous because the gang members will feel unsafe and come after one’s life. My role is to sell the stolen cars. I used to get documents from Ade to enable me sell the cars. At times I used to top N20,000 or N30,000 to the price the supplier tells me to sell especially those cars that needed quick disposal.”

Ade, an indigene of Ibadan, the Oyo State capital, who is a clearing agent at Apapa Wharf, said:

“These snatchers used to lie to me that the vehicles were Tokunbo cars and just to help them get vehicle particulars to enable them sell them but with time, I discovered that they were stolen cars but because of the quick money I used to get from forging documents, we agreed to work together for the interest of every member of the gang. My role is to perfect the vehicle documents for them. I charge N10,000 for each vehicle. At times, they will tell me that two or three of the vehicles were imported. I was arrested when Chucks called me and asked me to go and collect papers from Austin for the cars he supplied. Getting there I fell into the hands of ZSARS operatives.

Paul said: “I am a one-man car snatcher but I don’t use gun. My complete names are Okechukwu Austin Paul. I was a tanker driver before I became a car-snatcher. We used to be a two-man gang but my second, Sylvester later travelled to Malaysia. My weapon is wire which I used to move parked vehicles. My modus operandi is called park and remove but police call it removing from park. My only receiver is Chucks and he knows that the cars are stolen.

“When he needs cars from me, he will ask me whether there is market or did I go to market? I snatched about 13 cars and gave Chucks. I used to sell snatched cars N150,000 and N200,000 each to Chucks and, at times he will not give me a dime for one or two cars I supplied him claiming that police raided his place. I have been arrested by Lagos State police SARS operatives and they recovered three cars; Ogun State Police Command SARS operatives recovered four cars while Zone II Onikan Lagos recovered 13 cars. I cannot remember the number of cars I snatched since I started this job.