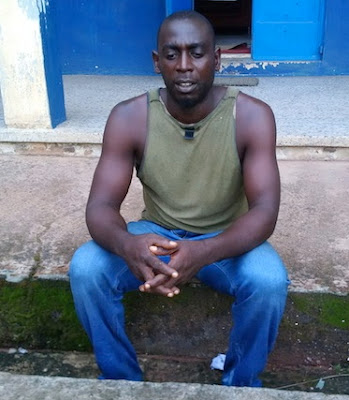 28-year-old Samson Ugbusun who recently embarked on an armed robbery mission has been arrested.

Mr Ugbusun who claimed he burgled into a home in order to raise N800,000 for the burial of his father was caught 24 hours after he invited his victim’s daughter for a night out in his apartment.

The suspect allegedly broke into his victim’s home at Etete in Oredo LGA of Edo and stole two mobile phones.

The girl allegedly fell to the randy suspect’s amorous overtures, visited him and spent a night with him in his apartment.

Hear what the suspect told police in Benin today:

“I stole handsets at Etete, through the window around 11:00 pm. I removed the handset through the window of the house after tearing the net. This is my first time.
“I saw her (victim’s daughter) number on the phone I stole. I called the girl and told her that I love her. She came and spent a night with me and went back to school.
“When she came to my place, she told her mother my address and everything; that was how they got me”.

He added that he stole the mobile phones to raise N800,000 for his dad’s burial.