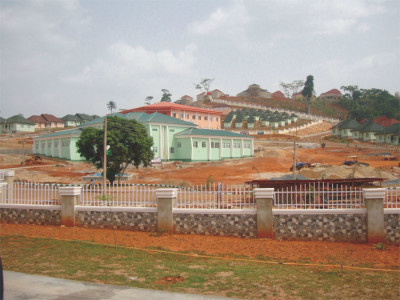 30 years after he conceived the idea, the general overseer of the Redeemed Christian Church of God (RCCG), Pastor Enoch Adeboye, has finally opened a prayer mountain.

The camp, which was opened at a relatively quiet ceremony, is located in Ifewara the hometown of the respected preacher, some 10 minutes away from the ancient city of Ife in Osun State.

Elders and pastors from the RCCG family and dignitaries from Ifewara as well as workers and volunteers of the project attended the opening of the facility named Mount Carmel Prayer Mountain.

Conceived as a prayer village, the facility boasts of a magnificent mix of sanctuaries, dormitories, chalets and numerous prayer huts flowing down the slope of a hill, overlooked by bigger residential blocks.

There are also halls of various sizes, a restaurant, bookshop and supermarket.

Welcoming guests at the opening ceremony, Pastor (Mrs.) Foluke Adeboye, who was in charge of the construction, revealed that although the plot of land had been bought years ago but was lying fallow until about seven years ago when her husband moved for its development.

Tracing the origin of the project, she said: “We had been inspired to build a prayer mountain by what we saw in South Korea in 1985.

“We went for a David Yonggi Cho prayer conference there, and one afternoon, they took the delegates to their prayer mountain, which we admired so much.

“So since 1985, we had it in our minds that one day, there would be a prayer mountain of a similar status in Nigeria.”

Also explaining the name of the prayer mountain, she said: “We named this Mount Carmel after the Mount Carmel where Prophet Elijah defeated the work of the devil. We also remembered the Mount of Transfiguration.”

Corroborating his wife’s account, Adeboye said, “When we returned from South Korea in 1985, we decided by this grace of God that there would be a prayer mountain in Nigeria that people from all over the world would come to pray.

“The way I had planned it, the place should have been built many years ago. But in the face of the enormous challenges, we resorted to building a place called “Halleluyah House” at Redemption camp.”

He went on: “Yet the passion for the prayer mountain was still burning in my heart. I believed that by the time I was 60 years old, we would have built it but it was not possible.

“When I was getting to 70 years old, I remembered that every year after 70 years of a man on earth is extra time.

“To ensure that the dream would not die, and efforts that had been made would not be fruitless, I called my wife and gave her the responsibility to build this prayer mountain.”

[Reported By Sunday Oguntola The Nation]