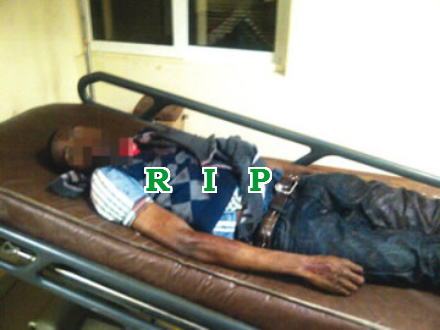 Picture above is the lifeless body of a security man identified as Wasiu Okanlawon who was murdered last Friday around 9PM in Ikeja Lagos.

The victim was attacked while returning to work with a female colleague around Ile Zik area of Ikeja when the bus they boarded had a flat tyre.

The bus passengers were said to have alighted, while the driver tried to change the tyre.

It was at this point that a group of robbers came out of hiding and attacked the stranded passengers.

Okanlawon was stabbed to death on the the neck while trying to rescue his female colleague from the armed robbers trying to rape her.

The deceased had already fixed his wedding date for September 12th, 2015 before his untimely demise.