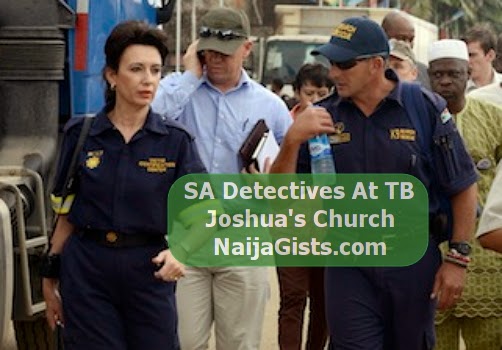 Forensic experts and detectives from South Africa have arrived Nigeria to get more information on their citizens who died at the collapsed church building in Ikotun area of Lagos.

Today the forensic experts from South Africa stormed the premises of TB Joshua church to investigate the cause of the tragedy that has trapped many South African alive.

He said Jonathan promised to investigate the cause of the September 12 collapse of the guesthouse at Synagogue Church of All Nations (SCOAN) which left scores trapped in the debris.

Farinloye said the death toll now stood at 86 as against the previous figure of 84 after the various emergency teams involved in the operation had reconciled their figures.

“You are aware that several rescue teams at the state and federal levels were involved in the operations. We sat together and reconciled our figures which has now brought the death toll to 86. But those rescued still stands at 131,” he said.

The church’s leader Joshua, who has blamed the incident on sabotage claims to work miracles, including raising people from the dead and healing the sick, and foreseeing disasters.

The controversial prophet said the building was designed by the Holy Spirit.